Toonies Make A Difference In Brant

Have you heard of “Toonies For Tummies”?  So have we.  What you probably didn’t know is that 100% of the donations raised at participating grocery stores in our community, stays in our community.

The Grocery Foundation, an Ontario-based not-for-profit dedicated to feeding hungry children, launched their “2015 Toonies For Tummies” campaign to help fund breakfast and snack programs in Ontario and Atlantic Canada.  The campaign video, (2015 Toonies for Tummies Campaign Video), a mix of humour and emotion, features children’s honest answers to the question, “What would you do with a Toonie?”

The Toonies For Tummies program was based on insights gained from Canadians in a 2014 survey, which confirmed that “88 per cent of Canadians report that they are inclined to give to a charity if they know they are making a difference, and 89 per cent agree that even $1 or $2 can.”

A Toonie does make a difference.  And 5,425 toonies will be making a BIG difference this school year for Brant Food For Thought and student nutrition programs.

Thanks to The Grocery Foundation, the 2015 Toonies For Tummies Campaign and our Lead Agency, Haldimand-Norfolk R.E.A.C.H., Brant Food For Thought received $10,850 in grocery store cards to help support healthy breakfast and nutritious snack programs for the school communities in Brantford and Brant.

“What a difference that will make for our programs”, says Gisèle Budgell, Program Coordinator.  “$10,850 translates into 10,850 healthy snacks or 7,250 nutritious breakfasts for students this school year alone.”

Thank you to all the customers in Brantford and Paris who donated a Toonie at one of the following participating retail grocery stores during the campaign:  Metro St. Paul Ave, Sobeys Colborne Street, Sobeys Paris, Food Basics King Georg Road, Food Basics Lynden 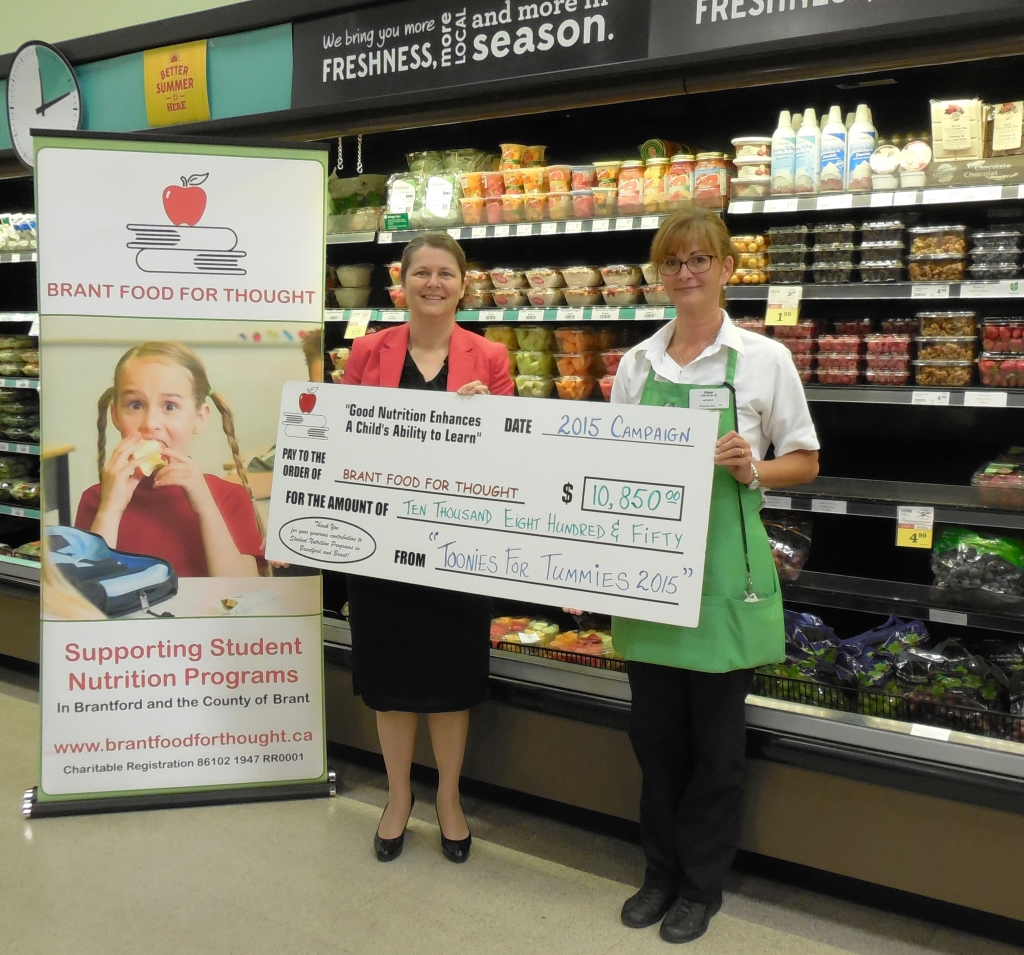 Sobeys on Colborne Street participated in the 2015 campaign, with Front End Manager, Monica Paethke, taking the lead.  “Everytime we have a collection for a donation, I notify all the cashiers that there will be some  incentives for the top 3 cashiers who collect the most donations”, mentioned Paethke.  “My staff and team are very good at collecting for all the charities and I am very proud of them.”

Paethke was also thrilled to discover that what they raised in their store will stay in Brantford.  “I look forward to sharing with my front end staff that this donation for Toonies For Tummies is actually staying in the Brant area.  Hopefully this knowledge will assist my cashiers in collecting even more for next year.”[/fusion_builder_column][/fusion_builder_row][/fusion_builder_container]